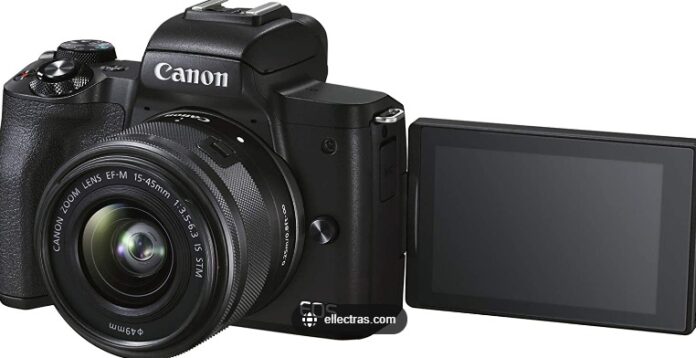 If you’re looking for an entry-level interchangeable lens camera, the Canon EOS M50 Mark II is the camera for you. This camera has 24.1 megapixels and is commonly referred to as the EOS Kiss M2 in Japan. It features a 3.5-inch LCD screen and a simple, yet effective, interface. In addition, it offers a wireless remote and Bluetooth for easy connecting with compatible devices.

The Canon EOS M50 Mark II provides a range of image quality settings, including JPEG and RAW. It also lets you choose which file format you prefer for better file size and image quality. There’s also an in-camera JPG file format, which uses the Standard Picture Style and default settings. Both formats have their advantages and drawbacks, but the M50’s Jpegs look much more pleasing than its raw files.

ISO performance is very good on the Canon M50, and it can reach ISO 51,200. The noise results aren’t particularly impressive, but they aren’t terrible. If you’re planning to use the camera in this range, be aware that the camera’s dynamic range is quite limited. As a result, it’s not advisable to shoot at high ISO levels.

The Canon M50 II has a simple interface. You’ll have access to many controls through the touchscreen and via the up navigation key. You can also adjust exposure using the touchscreen or control dial. The M50 II also features built-in Wi-Fi and Bluetooth.

When it comes to autofocus, the Canon M50 Mark II offers a combination of phase detection and contrast detection pixels. This means that it works well when shooting photos and videos of fast-moving subjects. Its focusing system is also reasonably accurate and fast. Although the camera does not support 4K resolution, its autofocus is good enough for entry-level photographers.

Another feature that sets the Canon M50 Mark II apart from many other compact cameras is the addition of eye tracking. This feature can now be toggled on and off through the Info button in Face Tracking AF mode. The previous model did not feature eye tracking and was unable to track the subject’s eyes in portrait mode. The M50 also features a 3.5mm microphone port and Wi-Fi connectivity.

The M50 II has Bluetooth connectivity, which means you can connect it to your smartphone or tablet via Wi-Fi. It can also be controlled by the Canon BR-E1 Bluetooth remote. The camera also features an OLED electronic viewfinder. This is a big advantage for outdoor photography, as it eliminates problems caused by harsh light.

The menu system on the Canon M50 Mark II is easy to use. It has tabbed menus and a “My Menu” option that makes it easier to use. It also offers customizable buttons, which means you can easily change your most-used settings.

The Canon M50 mark II is a digital camera with a compact size and a powerful video recording capability. The M50 was announced by Canon on February 26, 2018, and it went on sale three days later. It features a 3-inch LCD touchscreen and an optical image stabilization system for improved image quality.

The M50 II is equipped with a vari-angle LCD touchscreen, a flippy screen, and a movie self-timer that lets you get in position and press the video record button. The camera also supports vertical shooting, a feature that may prove useful for remote workers and vloggers.

The Canon M50 Mark II uses an EF-M mount, which allows it to use a reasonably wide range of lenses. Its telephoto lens is a good choice for vlogging. Its lens range is 55-200mm, which is suitable for most video projects.

Although the Canon M50 II lacks a built-in lens stabilization system, it does a great job of stabilizing 4K images. It can also use an EF-M to EF adapter to use standard Canon glass. The camera is also sturdy and has good physical buttons. However, the M50 Mark II’s one big drawback is that it doesn’t have Log shooting capability. In order to shoot in Log mode, you need to select one of Canon’s color profiles. This limitation may be a deal-breaker for some filmmakers.

As an added bonus, the M50 Mark II also doubles as a high-quality webcam. It can be connected via USB-C cable to your laptop and is compatible with various video-conferencing services, including Skype. The camera also includes a 3.5mm microphone input for external microphones. Popular external microphones include Rode wireless lavalier mics.

The Canon M50 Mark II is a mid-level interchangeable lens camera that can take images up to 24.1 megapixels. This camera is marketed as an entry-level camera for those who do not need professional photo equipment. It is also known as the EOS Kiss M2 in Japan.

The camera is designed to be a versatile mid-level interchangeable lens camera, with the ability to shoot in RAW format. This means that it can be used for a variety of photographic applications, from self-portraits to group shots. This camera will also appeal to vloggers and video creators in a single-person setup.

The design is aesthetically pleasing. It is compact and ergonomic, with a rounded design throughout most of the camera. There are no sharp edges or corners on the body, which is a pleasant surprise for most users. Another nice feature is the built-in Wi-Fi and Bluetooth. These options make this camera more convenient for interacting with your smartphone.

The Canon M50 II features a touchscreen LCD for viewing pictures and video. The camera is also capable of streaming video to YouTube directly. However, you must have a Wi-Fi connection in order to stream video from the camera.

The Canon M50 Mark II is the successor to the award-winning EOS M50. With the growing appetite for content around the world, Canon has stepped up its game with this camera. The demand for content creators is on the rise and shows no signs of slowing down. As a result, more people are exploring hobbies and developing new skills.

The Canon M50 Mark II offers a 35mm equivalent lens, making it an excellent choice for low-light situations. Its stepping motor delivers accurate autofocus functionality and a smooth video shooting experience. It also reduces the chance of blurry results when shooting in low-light situations. This camera is also compatible with a wide range of lenses and is a great alternative for pros and hobbyists.

The Canon M50 mark II camera is an entry-level mid-range interchangeable-lens camera, featuring 24.1 megapixels. This camera was launched in late 2013 and has already received good reviews. Its price is very competitive, making it an excellent choice for those who want to take high-quality pictures at an affordable price.

The M50 II offers a more powerful zoom lens and better image quality, along with a better EVF and a 1.04M-dot LCD. The camera also offers a range of extra features such as focus stacking, focus bracketing, and pre-shooting mode, which records a sequence of frames before the shutter button is fully depressed.

The camera comes with a built-in eTTL pop-up flash. It also has a hot shoe for an external flash. Other features include a 3.5mm microphone jack and two USB Micro-B slots. One notable omission is a headphone jack.

The camera also comes with an upgraded dual pixel AF system. This autofocus system offers eye tracking in both shooting modes. The M50 Mark II lacks animal and bird eye-AF, but it has eye tracking, which is great for tracking moving subjects. Also, autofocusing is contrast-based during 4K recording, so it is slower than a phase-detection system in 1080p mode.

The Canon M50 Mark II is compatible with wireless connectivity, as well as with the EOS Webcam Utility Software. It also has a vertical video recording feature, movie self-timer, touch record control, and can support the Canon Cloud Service.