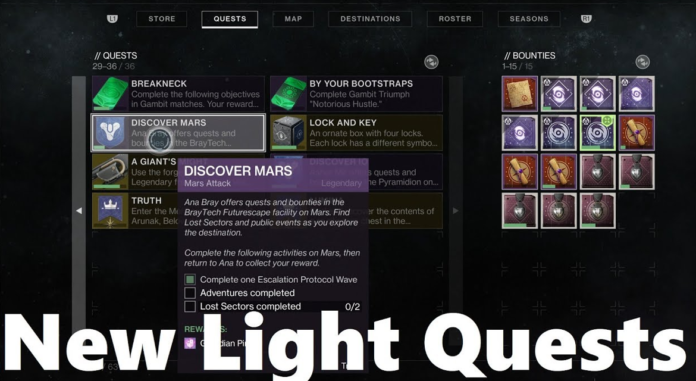 The new light quest is a brand new quest that will introduce players to the game’s new weapons and subclasses. This quest will also show the player the locations and game modes of Destiny 2. This quest will give players a taste of what to expect in the upcoming game. However, there are several nuances that should be taken into consideration before embarking on the quest.

The Lost Sectors in Destiny 2 are a series of locations that you can visit and earn loot. They contain chests, mini-bosses, and Triumphs. To get the loot, defeat the boss and complete the quest. The boss will drop loot in the chests, and you’ll also receive a cache code when you’re done.

The Legend Lost Sector has a special icon indicating the armor type it contains. Completing this mission with a fireteam will give you the chance to earn Enhancement Cores and other valuable rewards. Completing the Master Lost Sector is difficult and challenging, but the rewards are great.

Subclasses are new features in Destiny 2, which can be unlocked through the game’s campaign. Once you’ve completed the main campaign, you can unlock a subclass by completing certain quests. The first quest is titled “A Guardian Rises” and takes place in the Cosmodrome. After you’ve completed this quest, you’ll be able to talk to Zavala and activate the “A Spark of Hope” questline. When the questline is completed, you’ll be able to pick up any subclass quests that require it.

There are also new abilities that you can equip. For example, you can use the Void Overshield to reduce the damage you take from your opponents while performing offensive actions. Also, if you kill an enemy, you can use Void Invisibility to reduce damage that your enemies take. Void Invisibility is a temporary ability that ends when you perform offensive actions. Other abilities that can help you out in combat include Void Devour, which feeds off the energy of its victims. It will also grant you grenade energy, restoring your health to full. Finally, you can also use Void Weaken, which slows movement speed and affects all combatants in combat.

In addition to the three new classes, there are four new subclasses that can be unlocked. These subclasses are based on three different elemental types, which are Arc, Void, and Solar. For each class, you can have a different type of grenade. It’s up to you to choose the one that works best for you.

As a player of Destiny 2, you can unlock Exotics by completing quests and collecting drops. You can also earn Exotics by playing the Empire Hunt playlist. Exotics can also be upgraded with Masterwork Catalysts. However, you should note that the quests related to the Forsaken are no longer available in their original form.

For example, if you’re looking for an end-game DPS weapon, you should consider getting the Deathbringer. This unique Rocket Launcher allows you to perform end-game DPS because of the unique Void orb it shoots. In addition, it does more damage the farther you shoot it. In addition, you can also use this weapon to control crowds.

In addition to this, Exotic weapons also have an intrinsic anti-champion element. These weapons’ armor and weapon mods vary with each season. The mods are placed in your arm and affect any weapons of your chosen class. You can even equip these weapons with Seasonal Artifacts to enhance their abilities.

The Exotics in Destiny 2 are the most difficult content in the game. The reward of completing one is a rare Exotic weapon, which is extremely rare to obtain. For example, the Darkness in the Light exotic side quest will earn you a special weapon, which is very useful for your new adventure.

Missions in Destiny 2’s New Light campaign are a new way to complete objectives in the game. You can start a mission by finding a Quest Archive in the Tower. There, you’ll find a handful of old missions and a brand-new one aimed at onboarding new players.

The first missions in New Light will give you an overview of the game’s mechanics and will teach you the basics of the game. Once you’ve mastered these missions, you’ll be able to move on to the campaign mode. Until then, you can focus on improving your Power Level and unlocking armor mods. You’ll also want to chase after good weapons and armor to improve your gear.

The new Destiny 2 game includes over 50 campaign missions. The first one is called Cosmodrome and is an introduction for new players. It includes a new weapon and involves taking out a Spider Tank. However, you can choose any of the other missions to begin your journey. The New Light campaign also includes three year one campaigns. The Forsaken and Shadowkeep campaigns are also available in the game.

As you progress through the game, you can earn Crucible items. The Crucible is the PvP mode in Destiny 2. New Light allows players to access all Crucible playlists, including Clash, King of the Hill, and Rumble. By playing in Crucible, you can unlock Crucible weapons and armor.

Exploring Destiny 2: Beyond Light is an exciting new experience, bringing several new elements. The game introduces the concept of Loot, where players can find weapons and armour. The game offers Uncommon, Rare, Legendary, and Exotic weapons. Each of these types has a different power, as well as various perks and mods.

Exploring Destiny 2: Beyond Light has added a new campaign quest called New Light, starting off with the mission A Guardian Rises. The quest carries over some of the storylines from the original Destiny game, including the traveler in its prime. This new campaign quest, which starts after completing the previous mission, is only available for experienced players.

Beyond Light continues the game’s story, adding new player versus environment locations, weaponry, and a raid. Bungie describes Beyond Light as the start of a new era for the Destiny franchise. It will allow players to explore different areas of the game and find new ways to level up.

The New Light Quest is a free-to-play expansion for Destiny 2. It will take players through an abridged version of the game’s story. The quests will help players progress towards the endgame. They also provide an opportunity to earn Crucible weapons and armor.

The New Light Quest is a good introduction to the game for new players. It provides a quick boost up the ranks and allows new players to play with friends. Players start off in a 20-minute introductory scenario. Once they complete this mission, they will have enough weapons and gear to tackle the newest challenges.